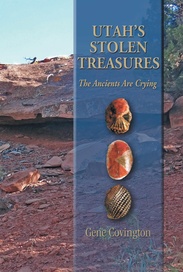 Utahs Stolen Treasures is a book that was inspired by three American Indian shields discovered by author Gene Covingtons grandparents in Wayne County, Utah back in 1926. Using the discovery of the shields as a point of departure, Covington provides a multi-layered tale, based primarily upon facts regarding the study of and caring for of the shields after they were discovered. As this fascinating book takes you via photographs through some of the most beautiful country in America, it also delves into the history of the early American pioneers and the American Indians they encountered, along with the folklore and legends of the American Indians. The story is centered around the three Fremont Indian tribal leaders who may have originally buried the shields in the early 1500s. This trio of Indian Elders appears throughout the story, first as living men and later in spirit form. The book also recounts the story of the authors own family, defining who Native Americans are, as it follows the lives of his grandparents up to and beyond the discovery of the shields. But Utahs Stolen Treasures is more than just a family history or a tale of Indian folklore. Ultimately its a plea to have the shields returned to Utah and for all of mankind to come together in peace. It uses the American Indian people, who originally occupied the lands that are now the United States, as an example of just how this might be accomplished.