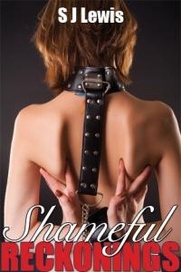 S J Lewis, author of the Prey series and many other sizzling erotica novels, is stunning in this BDSM novella combo. Shameful Reckonings is the joining of two sensational novels, Tropical Hell &amp; Giancarla. Tropical Hell Sigrid and Amanda are young women who find that being smoking hot makes it much easier for them to run their con games and embezzle millions of dollars from their unsuspecting marks. Their last score was their biggest, and there are some very unhappy and unsavory people looking for them now. To keep from being found, the two women have abandoned the false identities they'd assumed and fled the States for a Caribbean island, where they intend to enjoy a long and luxurious vacation while they wait for the heat to die down. They had no way of knowing that this island was the lair of predators always on the prowl for hot young women to abduct and turn into sex submissives, using whatever methods are necessary to break the women down and train them in the arts of giving pleasure to their new masters, male or female. Sigrid and Amanda were prime targets from the moment they landed. They had no idea what was in store for them. Giancarla is a trophy wife. Her husband has indulged her for so long that she has become arrogant and spoiled, mistreating the servants and taunting the male ones mercilessly by parading around in the skimpiest of bikinis. She does not truly love her older husband, and, since he is away on business so often, she's taken a lover to amuse herself sexually. She does not know that her husband has had people keeping an eye on her, nor that her infidelity will prove to be the one thing that he will not stand for. Found out, she is turned over to Boris, her husband's brutal chauffeur, who inflicts pain and humiliation on her and uses her voluptuous body to satisfy his lusts. She thinks her punishment is over when she is brought back to her husband, and tries to regain his good favor by pleasing him in whatever way he wants. He accepts her tearful submission, only to tell her afterwards that he never wants to see her again. She is to be sent away, to a place where the punishments administered to her by Boris pale into insignificance next to the new torments she's made to endure. She becomes nothing more than a frightened and compliant female animal as she learns what is expected of her. And, just as she thinks she has her new life, such as it is, figured out, she is sold as a trained submissive to a new master.