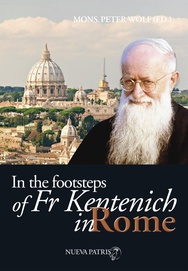 In The Footsteps Of Fr Kentenich In Roma

Editorial Nueva Patris offers this text by Monsignor Peter Wolf, based on a conference in the Vatican, precisely within the framework of a pilgrimage to Rome in the Year 2011, to Schoenstatters, who go on pilgrimage during the Jubilee year of the 100 anniversary of the founding of the Movement (1914-2014), and to those who will do it in the future. We hope that reading this book will help in following Father Kentenich's footsteps through Rome, and above all, be at the service of the Church, so that it will be the soul of the world.