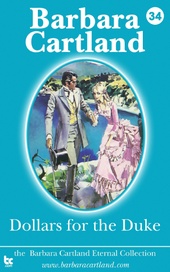 Dollars For The Duke

Following the sudden death of his rakish father, Seldon Burn unexpectedly inherits the title of Duke of Otterburn. Returning to the family estate, he swiftly discovers that the title is the only thing he has inherited, along with a mountain of his fathers debts and nothing with which to pay them. A brave and proud soldier, nothing has prepared the new duke for the devastation to the family coffers caused by his late fathers love of lavish entertainment, women, and good living. His cousin Edith suggests that he follows in the footsteps of many an impoverished English aristocrat and marry a wealthy American heiress.