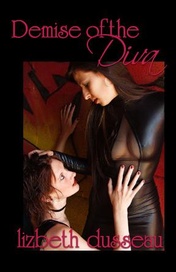 Demise Of The Diva

Demise Of The Diva

Patrick Penny Investigations brainchild of intrepid lesbian P.I.s Leslie Patrick and Robin Penny takes on a really hot case: the murder of the notorious Diva Felicia Roman. The circumstances of the crime lead the pair on an excursion through the leatherdyke underground, where motives and desires run deep. But as Leslie and Robin soon find, every woman harbors her own closely guarded secret Can they free their jailed client, Betsy Felicias last lover? She could be the killer but so could Martha whos been topping the insatiable Diva or Remy, Marthas jealous lover, or Zelda, their mysterious trampy friend, or even the intimidating leatherdyke Domme Jane Hugh, who may have the most to gain from Felicias demise. While Leslie and Robin unravel the mystery at the Victorian mansion on Roman Hill, sexual feelings between these former lovers are rekindled. Suddenly Leslie finds herself profoundly attracted by the S&amp;M world that Robin loves the one shes so adamantly shunned. Cover Image by Ludovic Goubet www.ludovicgouget.com Note: This work was previously published by Masquerade Books in 1995 under the title S&amp;M Murders: Murder at Roman Hill by Elizabeth Oliver, aka Lizbeth Dusseau. It has been updated and reedited, however, the plot and characters remain the same as in the original version.