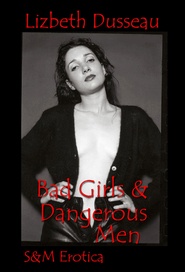 Madison's life is a string of bad boys and rough lovers, until she falls in love with her demanding, gentle, controlling boss, Bailey. His brand of S&amp;M is just what she needs and life should be perfect with this real man and nasty sexual master. However, an outstanding debt to a devious loan shark, Scofield, turns dangerous when, to help her pay off her debt, she's kidnapped off the street and secretly filmed while forced to perform lewd sex acts and S&amp;M tricks for wealthy gentlemen. Though she wants out of Scofield's sleazy schemes she has no money to pay him off. Abducted again, the game turns even more ominous. Taken to an estate house owned by a cult of sadists, she's forced to submit, initiated in a breathtaking scene of inspection, interrogation, bondage, whipping and humiliation. She can't refuse her captors. Threatening the lives of Bailey and her friends, they force her to submit. Even fleeing won't get them off her tail. When the cult catches up with her again, she's forced to be their sexual slave. This first person narrative is fraught with tension, mystery, fear and desire as Madison dives deep into her submissive self to survive, retaining only the slightest hope of rescue and redemption for her crimes.