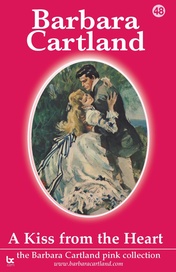 A Kiss From The Heart

Lord Robert Templeton is adamant that the responsibilities of his newly inherited earldom are not for him. Leaving his family home, Ledbury Hall, in the capable hands of his younger brother Alec, he plunges headfirst into the heady delights of London nightlife. But his carousel of gambling, drinking, and selfish pleasure is cut short and he is forced to return to home. Disenchanted by the society beauties that relentlessly pursue his handsome face and title, and willfully ignoring the attentions of an attractive but overbearing widow, the earl swears he will never marry. Feeling doomed to a life in the country, the earl is delighted by his timely acquaintance with Miranda Whitby, a childhood friend who once saved his life. Beautiful, capable and determined, Miranda inspires the earl to plan for the future of his estate. As their friendship deepens and the earl eagerly shoulders the responsibilities he once shirked, he is reminded of a promise he made Miranda many years earlier. But can a promise made as children withstand adult secrets?